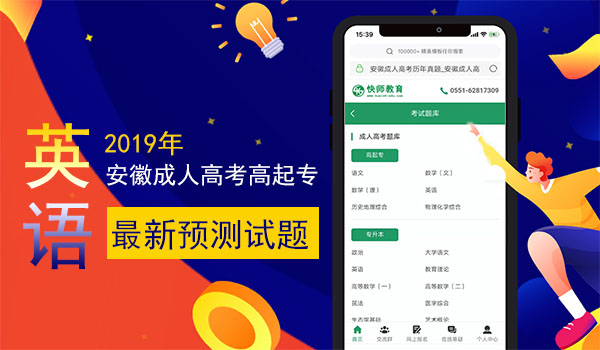 After ten years of being a housewife and a mother, Carol could not stand it any longer. Then, one morning,just after her two. daughters had gone to school, she saw an advertisement（广告） in the pa-per. She phoned,and was asked to come to an interview（面谈） that very afternoon.

Mr. Hollins,who interviewed her, was a young man about 24 in a blue suit. There was a hard look in his eye and he talked very fast. He told her she would be required to stop men between the ages of 21 and 50 and ask them several questions designed to determine what men think of deodor-ants（ 除臭剂）。 The information was to be recorded and she would be paid according to the number of complete interviews she had.

When Carol asked which factory the research was for, she was told that was not important. Last of all, before she began she would have to attend a one-day training. Carol accepted. After the train-ing, which was only about how to write down the answers correctly in a form and how to put the ques-tions, Carol found herself in the center of town at 9:30 in the morning. She soon found out that get-ting the information was really not all that easy.

First, she stopped a man who refused to answer any questions because he had no time. Next, a man told her it was none of her business whether he used deodorants or not. Then she interviewed a man who was hard of hearing and, instead of answering her questions, began asking her all sorts of his own. Finally, Carol found a young man with a pleasant smile on his face. He was coming towards her slowly and seemed ready to talk. He looked surprised when she put her first question. "I'm doing a research,too. It's about soap powders,"he said.

A. to record what she heard in the streets

B. to collect men's opinions on a product

D. to stop people who were using the product

A. fill her personal information in a form

B. receive training that might help her do her job

C. put the information collected in the form provided

（  ）38. What can we know about the third man Carol stopped in the town center?

A. He was impatient to listen to Carol.

B. He was ready to answer Carol's questions.

C. He found it hard to believe what Carol said.

D. He had trouble getting what Carol was saying.

One of the greatest killers in the Western world is heart disease. The death rate （率） from the disease has been increasing at an alarming speed for the past thirty years. Medical experts know that people can reduce their chances of getting heart disease by exercising regularly, by not smoking, by changing their diets ,and by paying more attention to reducing stress（ 压力）in their work.

However, Western health-care systems are still not paying enough attention to the prevention of the disease. There is a need for more programs to educate the public about the causes and prevention of heart disease. Instead of supporting such programs, however,the U. S. health-care system is spend-ing large sums of money on the surgical（ 外科的）treatment of the disease after it develops. This em-phasis（强调） on treatment clearly has something to do with the technological advances that have taken in the past ten to fifteen years. In this time, modern technology has enabled doctors to develop new surgical techniques. Many operation that were considered impossible or too risky （有风险的） a few years ago are now performed every day in U. S. hospitals. The result has been a huge increase in heart surgery.

Although there is no doubt that heart surgery can help a large number of people, some people point out that the emphasis on the surgical treatment of the disease has three clear disadvantages.

First, it attracts interest and money away from the question of prevention. Second, it causes the costs of general hospital care to rise. After hospitals buy the expensive equipment that is necessary for modern heart surgery, they must try to recover the money they have spent. To do this, they raise costs for all their patients, not just those patients whose treatment requires the equipment. The third disad-vantage is that doctors are encouraged to perform surgery--even on patients for whom an operation is unnecessary--because the equipment and expert skills are there. A govermnent official recently stated that major heart surgery was often performed even though its chances of success were low. In one type of heart surgery, for example, only 15 percent of patients improved their conditions after the surgery. However,more than 100,000 of these operations are performed in the United States every year.

（  ）39. What effect has modern technology had on medicine?

A. It has reduced the costs of medical treatment.

B. It has helped save the lives of most patients.

C. It has encouraged doctors to do more heart surgeries.

D. It have helped educate people about the prevention of heart disease.

A. to help patients recover

B. to increase the number of heart surgeries

C. to get back the money spent on the equipment

D. to buy new equipment for the treatment of heart disease

A. more money should be spent on the prevention of heart disease

B. heart surgery has helped most patients improve their conditions

C. modern technology has made heart surgery more risky than before

D. the public have known a great deal about the causes of heart disease

A. The Greatest Killer in the West

B. Heart Disease:Treat or Prevent

The Americans believe that anybody can become President of the United States. In a recent Hollywood comedy（ 喜剧）， that is exactly what happens.

Dave Kovic, played by Kevin Kline, is a kind-hearted man who runs a business that finds people jobs. He leads a typical（典型的）American way of life, except for one thing--he looks exactly like the President, Bill Mitchell. In fact, the only thing that makes him different from the nation's leader is that he is very nice!

The president has started using look-alikes during some public appearances. Dave is offered a chance to" serve his country" by becoming one. However, things go wrong. The President becomes very ill and Dave ends up acting as the President forever.

Director Ivan Reitman,who made the popular and successful comedies like Twins, Ghostbusters and Legal Eagles, could have gone for easy laughs by making fun of the American government. In-stead,Dave is an attractive comedy about an ordinary man in extraordinary situations. Kevin Kline gives a double performance as Dave and the President, and Sigourney Weaver is at her best as his First Lady. The love story that develops between her role and Dave is a real classic（经典）。

The film is 100% American. However, if you've ever felt that anybody could do a better job run-ning the country than the people in power, then you'll enjoy Dave!

A. To tell the reader about the American government.

B. To discuss the Americans' ideas about the President.

C. To make a comparison between Dave and other films.

D. To introduce a new film to the reader.

（  ）46. Which of the following is best supported by the text?

A. The author makes fun of the President.

B. The author thinks highly of the film.

C. The author is a fan of Hollywood comedies.

D. The author wishes to become the American President.

You might think that "global warming" means nothing more than a rise in the world's tempera-ture. But rising sea levels caused by it have resulted in the first evacuation （撤离）of an island na-tion-the citizens of Tuvalu will have to leave their homeland.

During the 20th century,sea level rose 8 -12 inches. As a result,Tuvalu has experienced low-land flooding of salt water which has polluted the country's drinking water.

Paani Laupepa, a Tuvaluan government official, reported to the Earth Policy Institute that the nation suffered an unusually high number of fierce storms in the past ten years. Many scientists con-nect higher surface water temperatures resulting from global warming to greater and more damaging storms.

Laupepa expressed dissatisfaction with the United States for refusing to sign the Kyoto Protocol,an international agreement calling for industrialized nations to reduce their greenhouse gas emis-sioins,which are a main cause of global warming. "By refusing to sign the agreement, the US has effectivly taken away the freedom of future generations of Tuvaluans to live where their forefathers have lived for thousands of years," Laupepa told the BBC.

Tuvalu has asked Australia and New Zealand to allow the gradual move of its people to both countries.

Tuvalu is not the only country that is vulnerable（ 易受影响的 ）to rising sea levels. Maumoon Gayoon, president of the Maldives, told the United Nations that global warming has made his country of 311,000 an "endangered nation".

A. rapid changes in earth's temperature

B. bad effects of global warming

C. moving of a country to a new place

B. higher surface water temperatures of the sea

A. agree to reduce its greenhouse gas emissions

C. allow Tuvaluans to move to the US 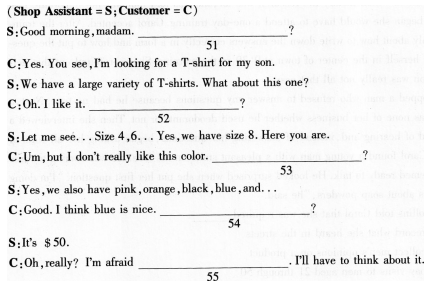 答案： Last Sunday afternoon my friends and I were walk-ing in Zhongshan Park when we suddenly heard someone calling for help. A girl fell into the lake and she was in danger. One of my friends and I jumped into the lake and swam towards the girl. When she was pulled out of it,she had stopped breathing. I had learned some knowledge about first aid at school. So I tried to start her breath by using the mouth-to-mouth way. My friend phoned the First Aid Centre. Within ten minutes the girl began to breathe again and the doctors from the First Aid Centre arrived. The girl was saved. They all said that what I did was right.