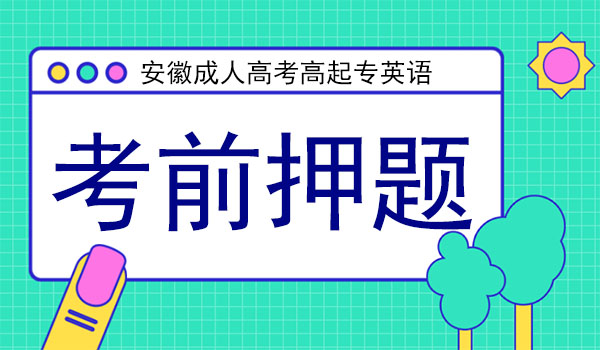 A. much more fond

A. So mine did

B. Neither did mine

D. So did mine

C. to have met

D. to be meeting

A. being not invited

B. not being invited

A. have been introduced

D. had been introduced

A. I would make

B. would I make

A. have been built

C. would be built

George and Margaret Glenn and their children live at 140, Davis Street, across the street from a small park. Their house is 21 off the main road. George 22 goes to work by bus, but sometimes he goes 23 his car. The children usually go to school by bus.

The Glenns' house is 24 hidden among the trees. It has small bushes(灌木) 25 around it. There is a fence 26 it and the house next door. It is a two-storey house, with the living room, dinning room and kitchen on the first floor, and the bedrooms and bathroom on the second floor.

The Glenns spent a lot of time at home. 27 now they are at dinner. Conversation(谈话) at the Glenns' house is usually lively at mealtime. The children are 28 trips they would like to take. Susan, who has never 29 on a plane, says, "I'd like to 30 a plane to California. " Henry, who is 31 , thinks it would be fun to be on a ship, heading for adventure(冒险) in Africa. Teddy, the youngest child, says, "I want to go around the world on a train. " His elder brother and sister are still trying to 32 to him why this is not possible when their mother says, "Children, you've spent too much time at the table. Henry and Susan, go and 33 your homework. Teddy, it's time you were in bed. "

Soon there is silence throughout the 34 Teddy is in bed, Susan and Henry are in their rooms studying, and Mr. And Mrs. Glenns are in their living room, 35 George is sitting in his favourite chair, reading the paper and Margaret is sitting on the sofa, doing some sewing.

For credit card(信誉卡)booking.Calls are answered.

Please enclose(附上)a cheque or credit card details together with a SAE or add 50p to the total amount(总额)to cover postage.Please send to the Box Office，RST，Stratford-upon-Avon，CV37 6BB.

Booking opens for all other plays on September 19.

The easiest method of payment is by credit card.You can also pay by：Eurocheque(up to

￡500)with your card number written on the back.

PAYING FOR YOUR TICKETS

Cheques and postal orders should be payable to：Royal Shakespeare Theatre.

36.In which of the following ways of booking does one probably have to pay extra money?

Joseph Lemasolai wrote a book about his life. His people, the Maasai, are nomads,meaning they do not stay in one place for long. They move their villages in search of good grassand fresh water for their cattle. "The cow is the centerpiece of pretty much everything we do,"Joseph explains.“That s why we move.We could not be nomads without cattle.You can’t move for nothing--you can’t just walk around.

When he was very young，Joseph spent much of his time looking after his family’s cattle，taking them to food and water and watching out for lions.He played on the grassland with his friends.

when Joseph was about six years old，he left his family to attend a boarding school(寄宿学校).There，Joseph faced difficulties much like other children do.He was laughed at because he was fat.He got into trouble daily with his teachers.

But Joseph also faced difficulty most children do not.”Every time school closed for vocation，I had to find my way home，“Joseph says，”That was one of the hardest things：“The village might be 5 miles a way.or it might be 50.Sometimes I wouldn’t know exactly where my family was.I had to search for them.”

Joseph later attended high school in a city.After graduation，he went to college.Finally，he became a social studies teacher，and now he is teaching seventh and eighth graders at a school.

friends.And he takes a group of students with him to see both the beauty and the difficulty of growing up in that part of the country.“I like to show them the other side of the coin.”Joseph says.

D.the animal in the middle

A.watching liens on the grassland

B.getting food and water for his family

C.taking care of his family’s cattle

D.visiting his friends from place to place

41.When school dosed for vocation，Joseph usually had great difficulty________.

A.finding out where his home and village were

B.understanding what he was required to do

C.getting in touch with his teachers

B.realize what the people really need

C.know about his love for his family

D.learn about a different way of living

New Zealand’s main exports come from the nation’s farms--wool，meat，butter，cheese，and skins.Many people process farm products in dairies(牛奶房)，meat-refrigerating plants，breweries(啤酒厂)and flour mills.Sawmilling is an important industry where logging is carried on in the forests to make pulp for newsprint and other mills make various kinds of paper.

factories and produce electricity.Sand and gravel(砂砾)used for road building and concrete

D.1eave the work to foreigners

45.Which of the following is NOT the mentioned minerals in the last paragraph?

The sea is very big. Look at a map of the world. There is less land than sea. The sea covers three quarters of the world.

The sea is very deep in some places. There is one spot, near Japan, where the sea is nearly 11 kilometres deep. The highest mountain in the world is about 9 kilometres high. If that mountain were put into the sea at that place, there would be 2 kilometres of water above it.

If you have swum in the sea, you know that it is salty. You can taste the salt. Rivers,which flow into the sea, carry salt from the land into the sea. Some parts of the sea are less salty than other parts. There is one sea, called the Dead Sea, which is very salty. Because it is very salty, swimmers cannot sink! Fish cannot live in the Dead Sea.

In most parts of the sea, there are plenty of fishes and plants. Some live near the top of the sea. Others live deep down. There are also millions of tiny living things that float in the sea. These floating things are very small. It is hard to see them. Many fish live by eating these.

The sea can be very cold. Divers, who dive deep down in the sea, know this. On the top the water may be warm. When the diver goes downwards, the sea becomes colder and colder.

Another thing happens. When the diver goes deeper, the water above presses down on him. It squeezes him. Then the diver has to wear elopes made of metal.

47. One spot of the sea near Japan is

C. two kilometres above the highest mountain in the world

D. two kilometres deeper than the height of the world's highest mountain

48. Which of the following is NOT true?

A. Fish cannot live in the salty sea.

B. The sea gets its salt from rivers.

C. Different parts of the sea have different amount of salt.

D. There is no fish in the Dead Sea.

A. near the top of the sea

B. deep down in the sea

C. at different depth of the sea

D. on tiny living things in the sea

50. The deeper divers goes down in the sea,

A. the wanner the sea becomes

B. the colder they find the sea is

C. the less the water above presses down

D. the heavier their clothes must be

Rose.OK.I think I can make it.

Rose：That’s a good idea?Why don’t we take some food for him?

答案：53.When/What time does it start